Located in the state of Karnataka, Mangalore is a small seaside town and also one of the major ports of India handling much of the coffee andÂ cashew nutÂ exports. It is now internationally famous for its red terracotta roof tiles. Drive through the town past government buildings, temples and market places. Visit the Artisan Village showcasing the arts and crafts of the area in their traditional settings: weaving cane for furniture, extracting sesame oil, ‘beating’ rice into flakes, among others. View a traditional manor house of the coastal landlords, few of which are in existence today due to high maintenance costs.

1. Mudabidri(34 km)- It is also referred as Jain Varanasi and has 18 Jain bastis or monasteries. The most famous being the 1000 pillared chandranatha Basti built in 1429. Basadis are Jain monasteries or temples where an image of one of the twenty-four tirthankaras (saints) is installed and worshipped.

2. Karkala- Located about 20 km from Mudabidri has a number of important temples and a 13m high statue of Lord Bahubai, which was completed in 1432.

3. Venur (50 km) – The sacred site is well known for an 11 metres high statue of Lord Bahubali, which was erected in 1604, on the southern banks of Gurupur river. It is a pilgrimage centre, located 50 kms northeast of Mangalore. It has eight Bastis and remains of a Mahadeva temple. The Kalli Basti 17 C major of them is devoted to Shantinatha. In this place also a Gommanteswara Monolith, has 11 metres high structure dating back to 1604C

4. Malpe (66 km) Ã¢â‚¬â€œ This beach is located 66 kms north of Mangalore, near Manipal. The quiet environments, makes this beach a famous tourist destination. The natural St. Mary’s Island, just a boat ride away has a beach and an inspiring geological structure of basalt rock pillars into the sea.

Soans Farm is located about 40 KM from Mangalore on National Highway 13. It has developed over years as a centre for innovative agriculture. Traditional agriculture in this area was restricted to the valleys with perennial water supply for crops like Areca nut, Coconut, Banana and Rice. An attempt was made in 1926 to bring into useful cultivation hilly areas and non forested grasslands dependent only on the seasonal monsoon rains for water supply.

Basel Mission, a Swiss-German missionary organisation which had pioneered printing in local languages and setting up of industries based on local raw materials, ventured into this pilot agricultural project under the leadership of Rev. Fischer, a missionary based in Karkala. Alfred Soans, a young agricultural graduate was employed in 1928 to vigorously pursue the project.Â  Because of the shallow soil over the laterite beds and the lack of irrigation, the initial coconut plantation did not prosper 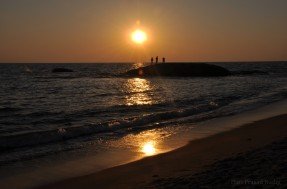